The “hashtag” is a powerful tool that originated on Twitter and has since spread to other social media sites. At its most basic, the hashtag is a word or group of words that follows the pound sign and is used to assign messages to a particular topic. Casual users utilize hashtags to organize their messages and make them searchable under a given search term. Internet marketers can use them to solidify their online presence and increase brand awareness, although many marketers remain ignorant of the power of this tool.

The surface-level benefits of hashtags are many and immediate. Most importantly, placing a hashtag within a tweet makes it visible to anyone searching for that hashtag. Furthermore, when other users click on the hashtag, they are taken to a list of all other tweets that contain it. This makes it easy for users to organize their tweets under a single banner, making their message more memorable to other Twitter members. Twitter users can place a hashtag anywhere within a tweet.

Internet marketers are well advised to embrace hashtag technology. Awareness of the hashtag and the power that it represents is increasing. During the 2013 Super Bowl, for instance, 38% of advertisements contained hashtags. If a marketer is not using hashtags, the chances are good that their competitors are. Additionally, other social networks including Facebook, Instagram, Pinterest, Google+ and Tumblr have adopted it. Functionality of the tool remains largely the same across platforms.

Hashtag usage still occurs most often on Twitter, and full-scale adoption on social network Facebook has been slow. However, many Internet marketers anticipate Facebook adoption to increase rapidly as casual users learn of the benefits of the tool. Twitter marketers can search for a hashtag to use on hashtag.org. Anyone can use a hashtag, and there is no need to register one before use. Consequently, marketers are encouraged to create a hashtag that is both relevant to their brand and not in use. Facebook users can look for any hashtag using the site’s search functionality found at the top of almost every page. 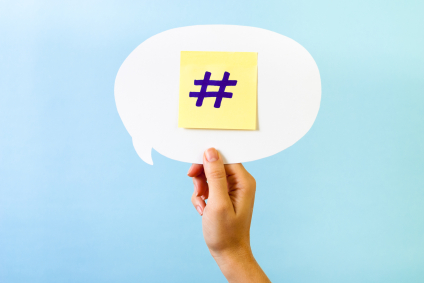 Marketers wishing to take advantage of this powerful tool should ensure that they are using the same hashtag on Twitter and other social media platforms. Using multiple hashtags confuses fans and reduces brand recognition. A single hashtag also allows marketers to gain a clear bird’s-eye view of all the discussion concerning their brand.

To begin working toward hashtag cohesion, marketers are advised to use the same hashtag on their tweets or posts for several weeks. During this time, it is likely that fans will pick up on this gentle prompting and follow suit. To further raise awareness of their brand, marketers can use their new hashtag in a promotional campaign. Promotions, whether on Twitter, Facebook or any other channel create heightened awareness of the pertinent brand for their duration. Facebook has dropped their requirement that contests be run through dedicated apps, making it easier than ever to run promotions.

To take advantage of trending topics or fads—and the traffic they generate—marketers can simply identify the hashtag associated with the event and use it in a tweet, along with their own hashtag. This tactic results in their hashtag showing up in the more popular hashtag’s tweet thread. It is important, however, that users integrate the trending hashtag into their tweets in a natural way.

Once users gain basic proficiency with hashtags, they should branch out into wider tags. This tactic may be especially effective on Facebook or anywhere else where many people are posting to a general yet popular hashtag, such as “#summer,” “#baseball,” or “#fastfood.” Users can simply integrate the wider hashtag naturally into a tweet or post that contains their own hashtag. This is an excellent way to reach new fans and customers. All Internet marketers are encouraged to take full use of hashtags. They provide an efficient manner to reach new leads and keep customers engaged.